A plant diagram is undoubtedly one of the most important documents in a manufacturing plant. We’ll start our schematic reading course with the simplest item we can find in an electrical closet – the cable connector (ZUG). Connectors are a very important element in almost every electrical installation and control and measurement equipment. They provide installation safety and connection security.

Manufacturers of cable connectors have already reached such a level that it is possible to adapt various models, even to the most demanding installations. In the offers from manufacturers we can find connectors with different purpose, functionality and current load. Connectors are mainly divided by connection mechanism, such as screw connectors, spring connectors, self-locking connectors.

You will need a sample diagram for the course. On the net I found a diagram of electrical and Control and
Measurement Instruments and Automation of a sewage pumping station. I think enough to start with.

Electrical Diagrams – What is a connector and otherwise a zug or terminal:

The connector I chose for the example is used to connect the first phase in a three-phase power system. The following parameters can be assigned to it:

ATTENTION! The connector symbol should not be confused with the connection symbol shown below:

Connections in electrical and control systems are not just made with connectors. The wire ends can also be connected to the terminals of other devices.

Electrical diagrams – What is a terminal strip

A single connector is used to extend a cable connection. By mounting the connectors one next to the other on the rails, you get terminal strips that are used to organize the connections in electrical cabinets. Terminal strips in simple installations are marked with X1, X2, X3, X4. In more complex electrical cabinets, strips are divided and labeled for example by function.

For example, if 20 analog sensors and 20 digital signals are connected to an electrical cabinet, 2 terminal strips (e.g. AN1 and DI1) can be installed for better organization. If we would like to go further, analog signals can be divided into further strips, e.g:

Although in practice you will most often encounter strips and connectors with the letter X.

Note that in the schematics, terminal strips are marked in one place on the left (X1). If the subsequent electrical terminals are placed in a single horizontal line, the strip designation may not be added to the subsequent terminals. It is not necessary for the terminal strip to be drawn in only one place on the diagram. For organization and readability of the diagram, a given strip can be drawn on several pages, not necessarily in order.

In the example diagram of the wastewater pumping station, one X1 terminal strip is used to connect all devices. In small control and measurement cabinets this is not a big problem, but in larger installations such solutions are unacceptable. Personally, I would divide the X1 terminal strip into 4, at least because the electrical terminals for connecting the pumps have identical designations:

Connectors can be used for potential separation. For example, if you want to make a strip with seven terminals and all of them have the same potential, e.g. 24VDC, you can use specially designed bridges. It would look like this: 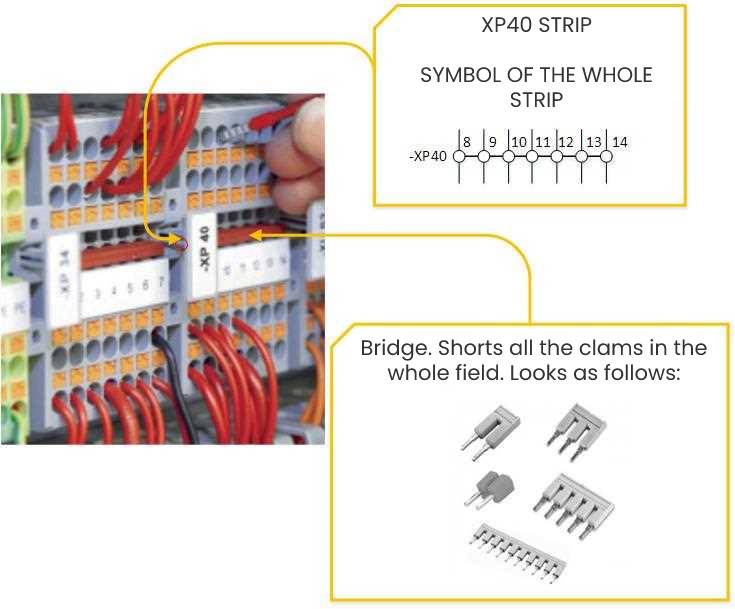