Contactor – an electrical mechanism switch, adjustable other than manual way, with only one resting position of movable contacts, capable of switching on, switching off, and conducting current under normal circuit conditions, as well as under overloads.

Electrical Symbols – What is a contactor?

In the previous lesson, electromagnetic relays were described in quite some detail. An electromagnetic contactor can be compared to a relay because the principle of operation is very similar: when the coil of the contactor is energized, the main contacts of the contactor close (short-circuit). The main difference between a relay and a contactor is that contactors are used to switch main circuits (e.g. motors), while relays are designed to connect auxiliary circuits (e.g. signaling, control).

The following animation shows the contactor when it is switched on. When the coil (yellow) is energized, the main contact closes (red) and current flows from the source to the load (e.g., motor):

Thus, we can say that a contactor is a switch whose operating contacts are closed by means of an electromagnet (coil) and kept in that state as long as the coil voltage is high enough. When the solenoid coil circuit is broken, the jumper falls (under the action of a spring) and the operating contacts open.

In simple terms, a contactor consists of a coil, working (main) contacts and additional/auxiliary contacts.

The following table summarizes the differences between a contactor and a relay: 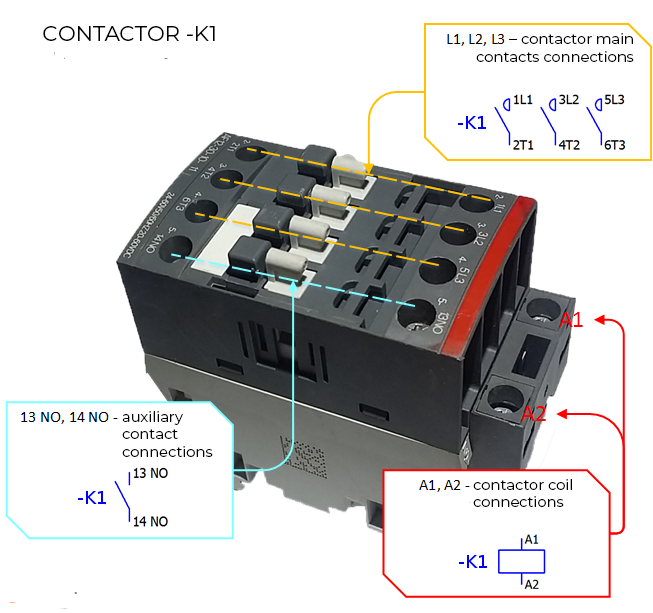 Let’s examine the control system in Figure 5 one by one:

In the sample pumping station schematic, there are two high-current loads – wastewater pumps, so there are two contactors. Each motor must be protected against overload, so there is a motor circuit breaker before the main contactor contacts. The auxiliary contact of the contactor was used to light the lamp and to transmit the signal to the MT101 controller. I have included comments on these contactors in the slides below: