In the previous two lessons, I wrote about relays and contactors, where the electrical contacts were switched electromagnetically. There are many other devices in which the contacts are switched mechanically, inductively, pneumatically or hydraulically. In this lesson, I will provide a summary of contact symbols along with their drives.

We know from previous lesson #2 that electrical contacts can be normally open (NO) and normally closed (NC) or changeover (NCNO). However, shorting or opening the contacts can be controlled in many ways – thanks to actuators. In lessons #2 and #3, electromagnetic drives – coils – have been described. In this article, I will introduce other types of contact control.

There are several other contact symbols on the schematic diagrams, e.g. through-hole, self-reversing and other functional symbols, rather rarely used. When analyzing the wiring diagram, we should first pay attention to the actuator that triggers the contact and analyze its use in the diagram.

In wiring diagrams, contact drives can be drawn in several ways. For example, solenoids may be drawn on a different page of the schematic than contacts. This also applies to devices with special functions, e.g. a phase control sensor can be drawn on one page and its auxiliary contact on the next page. Drives with contacts can also be drawn as one symbol, e.g. pressure switch. The wiring diagram will not draw the pipeline in which the pressure switch is installed, only its contact. Therefore, with contacts controlled other than electrically, their drive is drawn. Below is an example on a pressure switch:

Mechanical drives are those that are controlled manually by man (eg, buttons, switches) or as a result of the action of some mechanical element (switches, cams) . What is a button probably everyone knows. Buttons can be found almost everywhere, in the elevator, on the keyboard, on the TV remote control – they are monostable buttons. Buttons, or rather switches, such as in some cars, for example, from the emergency lights, fog lamps – these are bistable buttons, which remain in the pressed position after triggering and return to the original position after re-pressing – the same with turning. In automation, monostable buttons are used for simple control functions such as start, stop, reset, or e.g. protection – limit switches. 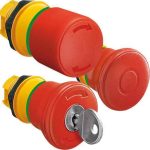 Almost every machine has safety buttons, which are almost always interlocked. Interlocking means that the button will be locked after pressed. Unlocking such a button is only possible after turning the button or pulling hard, or even only after turning a key. Safety buttons are used to disconnect the control circuit and are intended to bring the machine to a stop as quickly as possible. This is one of the reasons why NC contacts are always used for safety buttons – pressing such a button opens the circuit.

In the following table, the electrical symbols of the actuators are mainly drawn with NO contacts, because the actuator for NC and c/o changeover contacts will look identical, only the contact type differs.

Sensory drives are those that capture a signal from their surrounding environment. Typically, such sensors contain electronics. Such drives include, inductive sensors, optical sensors, acoustic magnetic sensors, etc.

There are a few errors in our sample wiring diagram. Among other things, on the designation of switch contacts S1 and S2 – R0A (Manual control / Off / Automatic control). According to the equipment list (page 25 according to PDF) these are knob switches SP22-P3-10. On slide 2, I have included corrections to the S1 switch.

We use cookies to ensure that we give you the best experience on our website. If you continue to use this site we will assume that you are happy with it.OkPrivacy policy